How To Play Alex Cramer Dominoes

How To Play Dominoes

Learn how to play dominoes by following the directions below or view the Domino Instructions (PDF).

ABOUT YOUR DOUBLE 6 DOMINO SET

The set consists of 28 dominoes. There are 7 doubles (same number on both ends from double blank to double six) and 21 singles (different numbers on both ends or a number and a blank).

There are countless different domino games and within each game, there are many variations of play available. The purpose of this set of rules is to get you started with a few simple and popular games. Later, we'll give you reference information for finding many other games you would enjoy.

One of the wonderful things about dominoes is that anyone can learn the basics very quickly, but as you play and progress, you will find many additional levels of the game and as your experience and skills develop, you will become a more and more formidable player. Get started with these simple games and you will find yourself getting smarter every time you play. Dominoes is a good game for your brain.

Two to Four people can play the games we'll show you here. If Four are playing, each person can play individually or you can group into two teams.

The basis of most domino games is to lay down a domino next to another domino so that the numbers (or blanks) on adjacent dominoes match each other.

The first domino played is call the "set". It could be anything, but here is an example

Singles dominoes are placed on the table making a line of play.

Double dominoes are played across the line of play 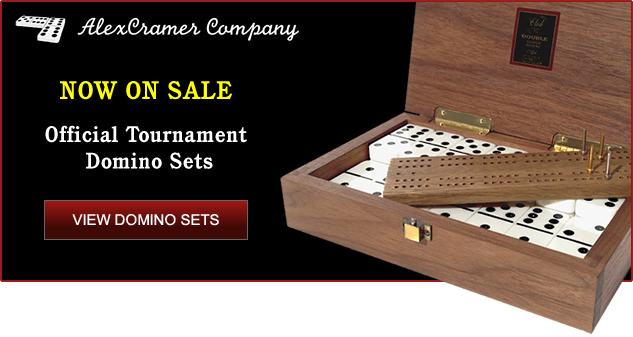 Although you normally play in a line, if you run out of table space, you can play a domino at a 90 degree angle to give yourself more room.

And then further play continues in a linear fashion from either end. 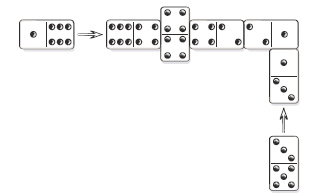 WHO DRAWS FIRST? WHO PLAYS FIRST

There are variations, but here is a starting point: Turn the dominoes upside down on the table and mix them around. Then have each player draw one domino. The player who draws the highest domino (based on total number of dots) will draw first and also make the first play of the game.

Each player places the dominoes on their side with the back facing the other players so they cannot see which dominoes their opponents are holding.

Each player in turn lays down a single domino according to the rules of the game being played. Play proceeds clockwise around the table. If a player has a playable domino, he must play it when his turn comes. You cannot hold back a playable domino for strategic reasons.

This is the simplest domino game.

The Objective: Get rid of all the dominoes in your hand

The objective is simply to get rid of all the dominoes you hold. Whoever does this first wins the hand. At the same time, each player tries to block the other player so he cannot make a play.

The Play:
Players take turns going first in each game. When a player is first, he may place any of his dominoes face up on the table to start play. The first domino played is called the "set".

After the set, each domino must be placed next to a matching domino. Singles must be played end-to-end. Doubles must cross singles. Plays can be made on either end of a single domino and on both sides of a double domino, but not on the ends of a double. 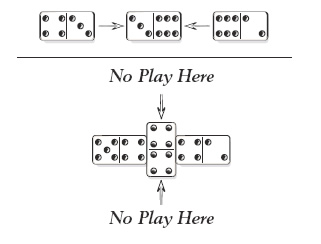 If a player does not have a play, he is blocked and he passes that turn. He may not draw from the boneyard. Play continues around the table until...

Ending the Game, Scoring:
...one player places his last domino. At that time, he calls "domino." The other players turn up all the dominoes remaining in their hands and count the dots. The total of the dots on the unplayed dominoes of the other players is the score of the winning player for that hand.

Winning the Game:
With each hand, you accumulate points. Before you start, and depending on how long you want to play, set a number (say 100 or 200) and the first player to reach that total score wins the game.

The play, ending the game and scoring are all the same as in "Block"

Some simple strategy notes for Block and Draw:
Look at the dominoes you hold and try to play them in such a way as to set yourself up for plays on your next turn. If you have lots of 2s, try to play a 2 so you will be able to match it the next time around (if someone else doesn't get to it first).

Since you know all the dominoes in the double 6 set, you can deduce what dominoes your opponents might be holding by observing which dominoes have been played and which you hold in your hand.

Winning the Game:
Before you start, and depending on how long you want to play, set a number (say 100 or 200) and the first player to reach that score wins the game.

This is a simple game in which you can score points every time you play a domino.

Number of players: 2, 3, or 4 may play. If 4 are playing, each may play individually, or you may create two teams of two players each.

The Objective: To outscore your opponents. You score by adding up the count of dominoes at the ends of the layout after each play. (explained below)

The Set-Up:
Turn all dominoes face down and mix them. Each player draws 5 dominoes and sets them up so the others cannot see them.

The Play:
As in the "Block" game above, dominoes must be played so their ends match. Dominoes are laid end to end except doubles which are laid across the line of play. As in "block", you cannot play on the ends of a double once it is placed. Play proceeds clockwise around the table. 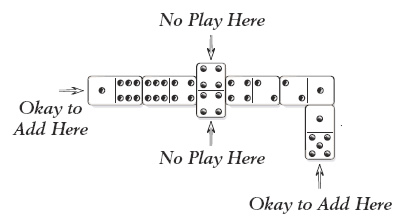 How to score:
In Muggins, you can score each time a domino is placed as well as at the end of the game. The object is for the open ends of the dominoes to be a multiple of 5. For each multiple of 5, you score one point.

Here are some examples:

Counting the score after each play:
When a player makes a score after placing a domino, a scorekeeper notes the score at that time. The running score can also be kept on a counter or cribbage board.

Ending the hand:
The first player to use all his tiles calls "domino" and this ends the hand. If no player can play his last domino and the boneyard has been depleted down to one or two dominoes (see "drawing from the boneyard" above), the hand is over.

Scoring:
At the end of the hand When the hand is over, the player (or team) with the lowest number of dots on their remaining dominoes receives additional points based on the number of dots in the opponents hands.

Ending the game, winning:
Keep playing the hands until one player or team has 61 points. That ends the game. Want to play longer? You can set the game ending score at 100 or 200 or whatever you would like.

Variation #1
In the basic game, you cannot make plays off the ends of doubles, but only off the sides. In this variation, you are allowed to play off the ends of the first double that is played.

Variation #2
If a player places a domino that would result in a score (a multiple of 5 on the ends of the dominoes played), but does not realize it, then another player can call "Muggins" and will receive that score. 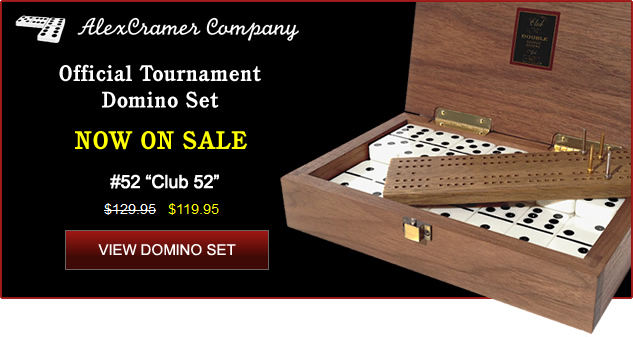 This game originated on the West Coast and is played widely and in tournaments there, but is also well known across the country.

Number of Players: Like Muggins, it can be played with 2, 3, or 4 players. If played by 4, each can play individually, or you can create two teams.

The Objective: Outscore your opponents. As in Muggins, you score by adding up the count of dominoes at the ends of the layout after each domino is played.

The Set Up:
Each player starts with 5 dominoes. See above regarding "Who Draws First, Who Plays First."

The Play:
The primary difference between Five-Up and Muggins is that the rules for placing of the dominoes are somewhat expanded from the previous games.

As explained above, dominoes are played in a linear fashion with the number of dots matching the adjacent domino.

Doubles are played at a 90 degree angle to the line of play.

Each end of a single domino may be played on only once, and then the numbers on that domino are "cut off" for scoring purposes. Only score based on the dots at the ends of the line of play. 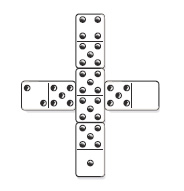 After a double is played on in this way, you can continue to build along the new line of play. This creates many more possibilities for play.

Scoring is the same as in Muggins. Count the open ends of the dominoes that have been placed. If the count is a multiple of 5, divide by 5 and that is your score. Here is an example. 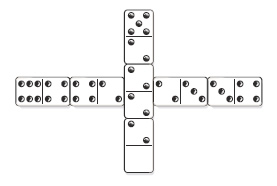 Ending the Game, Winning:
The game ends when any player places his last domino. At that point, that player (or team) adds to its score based on the number of dots on the dominoes in the opponents' hands. (when playing in teams, you do not add the number of dots remaining in your teammate's hand) Here are the rules for this process. For every multiple of 5 dots in the opponents hands, the winner receives one point. For a count of 1 or 2 above a multiple of 5, there is no additional score. For a count of 3 or 4 above a multiple of 5, round up to the nearest 5.

Game is over when one player or team reaches a total of 61 points.

Here are some thoughts and resources for your further consideration.

The very best writer on dominoes and domino strategy we have ever known is Dominic C. Armanino. Unfortunately, all the books he wrote are out of print, but you can still obtain some of them through Amazon. His classic is called "Dominoes...Five-Up and Other Games Including Official Rules and Odds." This book explains the Five-Up game beautifully and in detail and then walks you through many strategic considerations that will help you to be a better player. It was published in paperback under the Tartan Imprint and by David McKay Company. If you are into this game, you'll enjoy these books. Another good title from him is "Popular Domino Games" published by Van Rees.While not as extensive, it does give clear instructions for a number of good domino games.

The most extensive book containing the rules of many domino games is called "The Great Book of Domino Games" by Jennifer A. Kelley. The good thing about this book is that it is in print and you can get it on Amazon. If you want to expand the range of games you know how to play, this book is a good choice. It will give you the basics of many games.

These rules were put together as best we could from the information we could find. We may have missed something, and if we did, we hope you'll tell us about it. For corrections or useful additions, send us a letter or use our contact page and we'll keep making these instructions better based on your thoughts.